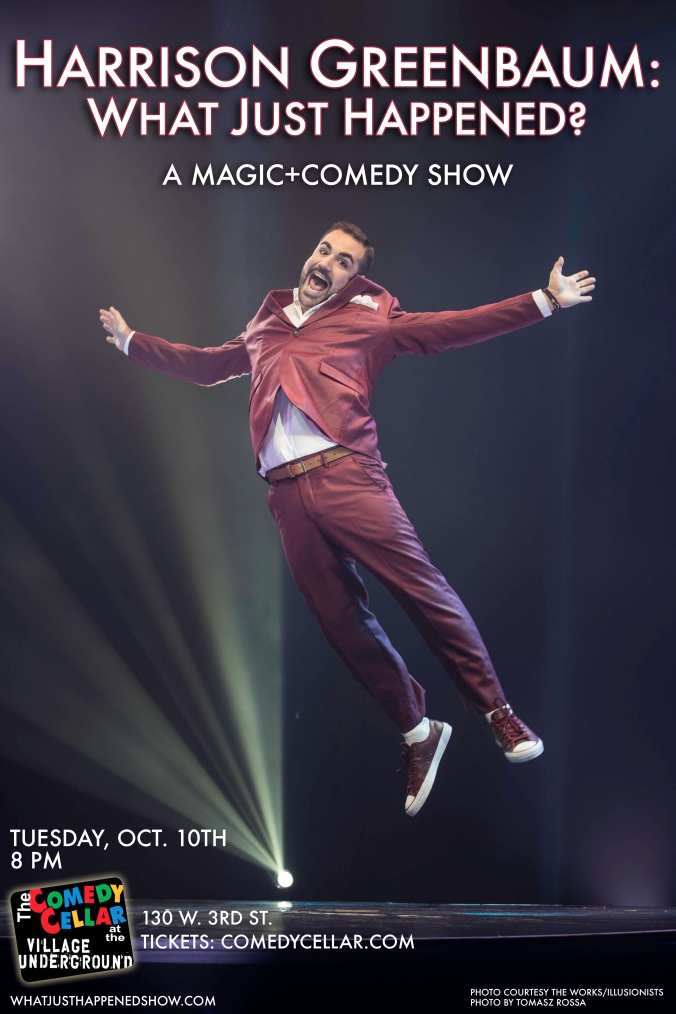 I’m doing the full, uncensored show on Tuesday, October 10th, at 8 PM at the Comedy Cellar @ the Village Underground. It’s the first time the legendary Comedy Cellar has EVER had a magic show, so I couldn’t be more excited!

Tickets are only $15, so make your reservations now! Can’t wait to see you all there!

Now that Seeso’s shutting down, the domain name, IWantANetflixSpecialButSeesoOrAmazonIsGoodToo.com doesn’t make much sense, so I’ve updated it to remove Seeso (R.I.P.) and include Hulu, which features stand-up and just won a boatload of Emmys.  I was also an early adopter of Hulu and have been paying for the service for YEARS, so hint hint wink wink, Hulu.  Your move.

Magicians have been telling me stories about Abbott’s Magic Get-Together for a while, usually followed by “it’s impossible to really comprehend it unless you’ve been there,” followed by “you have to do it at least once in your life.”

When the offer came to perform at the 80th anniversary of the Get-Together, I jumped at it.

Abbott’s Magic Get-Together takes place in Colon, Michigan (slogan on a magnet I received: “If you ain’t been through Colon, you ain’t shit!”), population, 1,173.  There’s one traffic light (although it only has one color – red – and just blinks on and off), one gas station, and three magic stores.  Three.  There’s also magic-themed everything: there’s a floating lady and a hidden magic room in the pizzeria, there’s a hair salon called “Illusions Hair Care,” and every street is named after a magician.  There’s also a graveyard filled with magicians, which I had the honor of getting a tour of from expert Al the Only at 1:30 AM in the morning, lit only by moonlight (and a flashlight or two).  (One of my favorite stories: there’s a husband-and-wife magic duo buried in each other’s plots, which means they’re performing one last Metamorphosis illusion.)

There are no hotels for miles around, so you stay in somebody’s house or camp on someone’s lawn.  I was put up in a stately, lakeside house I was told was previously owned by a doctor who had since passed away.  When I asked for the key, I was told that it wasn’t necessary: just leave the door unlocked, just like everybody else.  The town was that kind of wonderful.

I performed on the Thursday night show in the high school gymnasium (home of the Colon Magi, the mascot of which is a bunny rabbit named “Hare E. Blackstone,” a pun on the name of the magician who helped open this town up to magic nearly a century ago, Harry Blackstone) to a sold-out crowd of over 1,000 (the population of the town doubles overnight when the Get-Together starts).  I changed in my dressing room (a.k.a. the locker room) and made final preparations backstage (a.k.a. in the band room) while enjoying the pre-show organ music, being played live as it has been every year for decades. 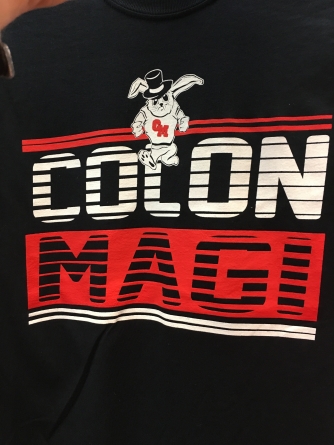 It was a thrill to present excerpts from my special at Abbott’s, an honor to get a standing ovation at the end, and a joy to hang out for a couple of days afterwards and fully immerse myself in a magic convention whose home wasn’t a hotel but an entire Midwest town.

Fast-forward to Saturday night (I was actually supposed to leave Saturday morning, but was having so much fun I moved my ticket to Sunday morning, so I could stay an extra day!) and I was told to head over to the Elementary School (which is also the magic dealers’ room).  I didn’t know this when I signed up for the Get-Together, but the performers of the week are all considered for one of four yearly awards.

It was an INCREDIBLE honor to receive the Senator Crandall Award for Comedy Excellence and to receive my award alongside fellow award winners, Tina Lenert, Gene Anderson, and Kalin & Jinger, all of whom are huge heroes of mine.  It was surreal. 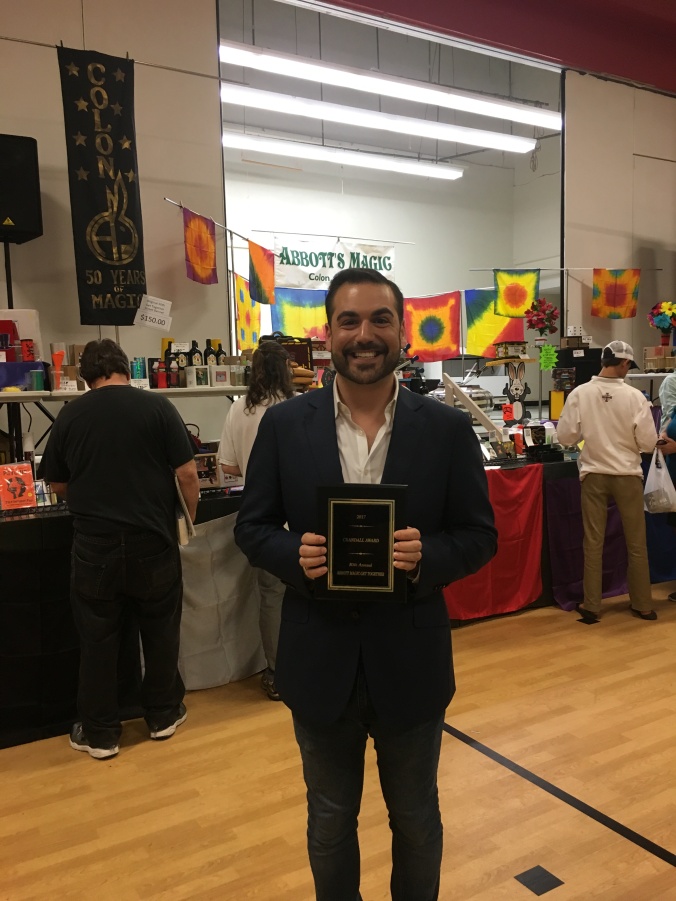 In my speech, I jokingly thanked them “for being so right” and that I “humbly accepted the huge cash prize that goes along with it.”  (There is no cash prize.)

Let me sum up the experience with a random story: a friend invited me to swing by the house he was staying at on Friday around lunch time, told me he was on Blackstone Street.  I got found the street, made a left, and walked up to the door.  I knocked and could have sworn I heard someone say come in.  The door was, of course, unlocked, so I entered, looked around a bit, was confused by the crossbow and taxidermied animals, and was met by an equally confused old lady.  Turns out there are TWO Blackstone Streets (East and West) and I was at the wrong one.  I was also A STRANGER IN HER HOUSE and her first reaction wasn’t, “Who the hell is this stranger?”, but “How can I help this magician?”  And that’s Colon, Michigan.

Back in July, I wrote about the incredible response I received from the airing of my America’s Got Talent audition (post here).

And here’s what they aired of my 2nd set for Judge Cuts:

(That’s a very edited down version of a much longer joke, which you can see here:

It’s been a whirlwind, to say the least, with a huge spike in social media (shameless plug: you can follow me on Twitter and Instagram) and a bunch of performance opportunities, but overall the main excitement was just the exposure to a broader audience (each episode gets 20-30 million viewers, which is more viewers than all of my live audiences throughout my entire career combined).

The boost hasn’t led to a Netflix special yet, but the new fans (you guys rock!) have definitely been tweeting about it a whole bunch and every last bit helps!  I also think in the long run the national exposure also increases the odds Netflix finally pulls the trigger and greenlights the special, but I guess we’ll have to see!

Tomorrow: photos and stories from my trip to Abbott’s 80th Magic Get-Together!

This summer has been really crazy, but this week, I’ll try to update you on EVERYTHING that’s been going on and all of the crazy exciting things coming up!

Here’s a list of what I plan to write about (these will turn into links as I write the blog):

Stay tuned and see you soon!

Last Tuesday, I debuted on America’s Got Talent (video available here) and everything went insane.  That YouTube video alone has nearly 750,000 views and millions of people tuned into the live broadcast, which is mind-boggling to consider, especially since it means more people saw this set than have been in all of the live audiences I’ve performed for in my entire career COMBINED.  Total craziness.

Basically, this screengrab sums up how I’ve felt since then:

Since then, all my social media exploded (which is a good thing) and have been able to mention this project in my exclusive interview with Matt Carter (also a good thing), so I’m more optimistic than I’ve ever been that turning this Netflix special dream into a reality is close!  (Then again, I’m a comic, so optimism is usually followed by an unhealthy dose of cynicism and negativity, but I’m working on it.)

My next performance on America’s Got Talent airs TOMORROW (Tuesday, July 18) at 8 PM EST, so tune in!  Whatever happens, I’ve been blown away by the overwhelming amount of support by family, friends, and fans, so can’t thank everyone enough.  THANK YOU THANK YOU THANK YOU.

The April 18th show at the Cutting Room was a huge success — not only was it sold out, but the New York Times featured the show in the Arts section!

Thanks again for all your support and hopefully have some VERY exciting news to share soon!

I was recently featured on Art of Magic’s Magic Thinking podcast (you can listen to the episode here) and offered people a link to the beta test of the special, which many people took me up on.  Excited to get new feedback to incorporate!

Also, I’m doing the full, uncensored show at the Cutting Room on Tuesday, April 18th, at 7:30 PM, so get your tickets soon!

As always, if you want to help in any way, reach out to me at harrison@iwantanetflixspecial.com – thanks in advance!

I have been on the road a crazy amount as of late, but keep making strides towards making this special a reality.  Part of that has been trying to get press for the special and for this blog in particular.  I’ve made some good in-roads (especially with publications I already have a relationship with), but hoping to really kick the PR machine into full gear by the end of this month.

Got the 1st official blog post in iTricks.com (post here) and have mentioned this blog in my regular column in Genii, the largest, oldest, and only-est magic magazine in the U.S., so hopefully this will begin to get the snowball rolling, if only a little.

If you know of anybody I should reach out to, are a reporter yourself, or have a blog/podcast you’d like me on, hit me up by e-mail!

Thanks to the amazing work of Mike Boyce, we have the 1st trailer of the special!  There’s a full trailer in the works that shows a bit more of the magic, but very excited for you to see our first teaser!

As always, send any feedback you have to harrison [at] IWantANetflixSpecial.com – stay tuned for some even more exciting announcements soon!